Intelligent Food Concepts participated in the VIII edition of Millesime Madrid that took place at the Arena pavilion in Casa de Campo from 6 to 10 October.

Millesime Madrid, an annual event, has become throughout the years an important meeting point to companies, premium brands and media alike to talk about Spanish haute cuisine and to serve as a display for world flavors. Mexico was the guest country this year and it was represented by some of its more distinguished chefs.

Millesime participants also had the chance to enjoy some life music, wine tastings, cocktail shows and gourmet items over the days.

Intelligent Food Concepts formed alliance with Caviar Per Sé and together we prepared a few successful tapas such as Coconut ajoblanco with sturgeon and caviar or Trout bites from the Pyrenees of Navarre with its roe and citrus vinaigrette.

Millesime offered us the opportunity to share some time with friends like Rafael Ansón, Andrea Tumbarello, Juan Pozuelo, Castillo de Canena and Arturo Sánchez among others. 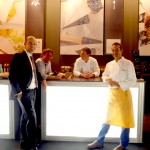 IFC and Caviar Per Se together at Millesime Madrid 2014